… or this is probably going to be a downer, or in lieu of addressing insurmountable graver circumstances, or best to keep on believing, or giddy-up, cowboy, or too old to be new, or some more rituals from the discarded catalogue…the title can change, but nothing is to be taken for granted…that’s another possibility, nothing is to be taken for granted.

60 Minutes towards being here is an encounter with the moment. It is a negotiation between fixed material and an ever-evolving situation whose conditions can’t be ignored, a composition between a performer and a musician. Frank Willens sets the alarm for one hour and investigates the vast multiplicity of the given condition.

60 Minutes towards being here will be performed on the following dates:

Frank Willens (US/DE) is a dancer, choreographer, performer, interpreter, artist, actor, collaborator, tour manager, human, father, singer, beat-boxer, thinker, marathon-runner, train-traveler. He grew up in California and has lived and worked in Berlin since 2003 where he has had the privilege to work with a wide number of persons in a wide range of projects presented in a wide range of venues. His associates include Tino Sehgal, Meg Stuart, Falk Richter, and Peter Stamer, to name a few. Frank developed a project in collaboration with the Transform Festival in Leeds in 2015 and headed a residency/lab at the Kunstmuseum in Bonn in 2016. His new solo piece sixty minutes towards being here or what we can do until we do what we can do premiered in Berlin in January 2017 On Truth and Lie in an Extra-Moral Sense is his 5th collaboration with Peter Stamer.

Presented with support from the Getting To Know Europe program, awarded by the Delegation of the European Union to the United States. 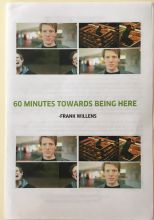