Collection Description:
Books were part of the exhibition Rigo 23: When Ripples Become Waves by Rigo 23 that occured at the Main Museum from 2/25-4/13. Rigo 23: Ripples Become Waves featured works that emphasize the artist’s longtime advocacy for social and political change, specifically calling attention to the incarceration of political prisoners and the plight of indigenous communities in the United States. Rigo 23 (b. 1966, Portugal), is a Los Angeles-based Portuguese artist known for large-scale outdoor murals, is considered part of the first generation of the San Francisco Mission School art movement, which emerged in the city’s Mission District in the early 1990s. For nearly three decades, his socially engaged work has focused on addressing injustices, notably highlighting Leonard Peltier, a member of the American Indian Movement who was convicted of murder in connection with the shooting deaths of two FBI special agents on the Pine Ridge Indian reservation in 1975 and whose two life sentences have been the subject of much debate. Rigo 23: Ripples Become Waves was the first presentation of the artist’s statue of Peltier after its contested removal from American University’s campus in early 2017. http://www.themainmuseum.org/exhibition/rigo-23-ripples-become-waves

Item Description:
"The American Indian occupation of Alcatraz Island was the catalyst for a more generalized movement in which Native Americans from across the country have sought redress of grievances as they continue their struggle for survival and sovreignty. In this volume, some of the dominant scholars in the field join to chronicle and analyze Native American activism of the 1960s and 1970s. The book also provides extended background and historical analysis of the Alcatraz takeover and discusses its place in contemporary Indian activism". -American Indian Activism: Alcatraz to The Longest Walk / MD 1/13/2019 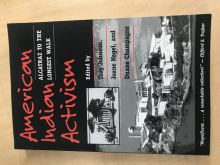