"Captured By The Norwegians has been compiled in a language which may be described but never spoken—its syllables must be understood through the medium of our eyes, says Robert A. Robinson in his introduction to this book. He refers of course, to the language of pictures, applied here to his interpretation of Norway and its people in the 1950s.

The book was first conceived in 1953. The published decided that no restrictions of any sort should be placed upon their author. He therefore looked at Norway freely through impartial eyes, and the result is a volume of pictures by one who came as a stranger and remained as a friend."

“Robinson’s photographs are also reminiscent of those included in the ‘Family of Man’ and it is tempting to see Captured by the Norwegians as a local expression of the same sentiments but the comparison is complex. Steichen aimed to subsume national identity in a new globalized oneness that skirted politics and ideology in favour of a utopian common round of experience. Many accused it of sentimentalism, political naivety and a deep Americanism that was actually far from international. By comparison Robinson’s book is a humble vision that makes so few claims for itself. I find it an honest, unpretentious and endearing account of one person’s experience and expression. But maybe it has taken that half a century to re-realise this.” 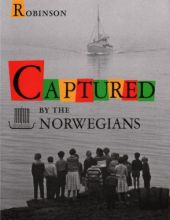