BIO's.
Sharon Lockhart received her MFA from the Art Center College of Design in Pasadena in 1993. She has been a Radcliffe fellow, a Guggenheim fellow, and a Rockefeller fellow. Her films and photographic work have been widely exhibited at international film festivals and in museums, cultural institutions, and galleries around the world. She is currently an associate professor at the University of Southern California’s Roski School of Fine Arts.

James Benning
"I was born in Milwaukee, Wisconsin, during World War II in a German working class community that sent its sons to fight their cousins. My father worked on the assembly line for a heavy industry corporation that was then building landing gear for the U.S. military. Later he became a self-taught building designer. I played baseball for the first 20 years of my life receiving a degree in mathematics while playing on a baseball scholarship. I dropped out of graduate school to deny my military deferment (my friends were dying in Viet Nam) and worked with migrant workers in Colorado teaching their children how to read and write. Later I helped start a commodities food program that fed the poor in the Missouri Ozarks. At the age of 33 I received an MFA from the University of Wisconsin where I studied with David Bordwell. For the next four years I taught filmmaking at Northwestern University, University of Wisconsin, University of Oklahoma and the University of California San Diego. In 1980 I moved to lower Manhattan making films with the aid of grant and German Television money. After eight years in New York I moved to Val Verde, California, where I currently reside teaching film/video at California Institute of the Arts. In the past twenty-five years I have completed fourteen feature length films that have shown in many different venues across the world. 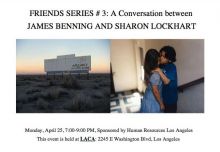