Scope:
Hecuba is a band based in Los Angeles, California featuring performance artist, Isabelle Albuquerque and musician/designer Jon Beasley.[1][2][3] They have toured with Devendra Banhart, Bat for Lashes and Rainbow Arabia. They have released two albums on Manimal Vinyl since their formation in 2006. Their second release, Paradise,[4] has received favorable reviews from NME, Pitchfork Media, LA Weekly and XLR8R. They performed at the Los Angeles premier of Wild Combination: a film about Arthur Russell (musician) performing their versions of Russell's music. Their third album "Modern" was released in 2012 on the LA-based label Germ.

B1 Tom & Jerry
B2 Everything
B3 Suffering 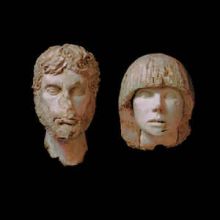