Made for the exhibition Imago at City Limits, this book features 26 color video prints from various films in double page spreads.

As I luxuriate in the desire that I am no special sponge for sorrow, but merely another fallible animal in this stone maze of a city, I come simultaneously to see that I am the focus of some vast device fueled by desire. - Marly

In any work of fiction, one can't help but closely examine the intervals between reality and narrative. It is a suspension of disbelief that entertains us and provokes the imagination, but it is the half steps between the author's invented universe and our own which allow us to engage.

These intervals fascinate Luca Nino Antonucci, whose new works are heavily influenced by cyberpunk literature of the 1970s-1990s. Cyberpunk works blend the fantasy of science fiction with the pathos of crime noir, muting some of the exaggerations of either genre. (Consider the film Blade Runner, itself an adaptation of a Philip K. Dick novel, an archetype of the genre.)

Imago refers to an idealized mental image of another person or the self. It is also the rather bland namesake of a now-defunct corporation that made plastic protective cases for photographs, which the artist purchased at SCRAP in San Francisco and repurposed as packaging for a new limited edition book. This book contains analog "video prints" made by capturing stills from different VHS cassettes, a technological predecessor to the screen shot.

Other archaic parts from an earlier age of home computing dot the exhibition, as do literal and metaphorical cause-and-effect relationships between the works. The resulting installation is less about the taxonomic divides of media and more about the interstices between another binary relationship — life and art." 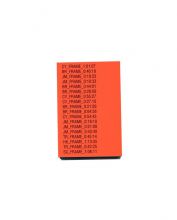