What we perceive and think of as "true" is widely influenced by our knowledge—carrying with it implicit conceptions we are not aware of. Design, as a planned action, is necessarily both theory and practice. It brings together thinking and everyday objects and therefore ingrains itself in the contexts we are all living in. Yet, being largely unreflected on, design is likely to simply affirm societal norms instead of questioning them. If design aims at taking a critical stance, it needs to change its acquaintance with knowledge and develop its own discourse to understand the underlying conceptions that are at play.

The metaphor of the "blind spot" proposes the perspective of looking at what is implicit or unnoticed in our perception. By doing so, it seeks to open up common readings of what design is and can do. The montage of texts featured here includes diverse voices and readings, meant to create a space in which debate can unfold, a debate that considers the impossibility of an unbiased position and as such reminds us of our dependence on the other in any conception—and any project design might aspire to. 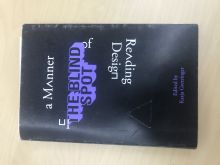