Instructions and programming for LESBIAN GULLS, DEAD ZONES, SWEAT AND T, an exhibition of work by Los Angeles based collaborators Candice Lin and Patrick Staff.

Filling the space, the artists have hacked commercial fog machines to vaporize homemade herbal tinctures into hormonal smoke. The common botanical ingredients used – such as licorice and black cohosh – are natural anti-androgens, a class of drug typically known for suppressing testosterone production in the human body. The installation of these fog-machine sculptures creates a slow forming cloud, enacting a potential intrusion of disruptive botanical knowledge, and proposing a cross-pollination and infection between bodies, ecosystems, and institutions.

Lin and Staff’s research and queer re-readings of botanical texts inform the foundation of the project, beginning with a consideration of how herbal treatments were historically associated with female social roles of healer, herbalist, and witch; and the transplantation and exploitation of plant knowledge through colonialism; its suppression, renaming and regulation. Within this lineage, the artists propose a non-binary queer exploration of hormone therapy and toxic sex, both seeking to pervert pollution and queer the possibilities of endocrine disruption.

Constructed from simple household and hardware materials such as fans, funnels, hot plates and aluminum roasting pans, the sculptural machines reference an unassuming auto-didacticism, wherein grassroots knowledge of both DIY construction and herbal medicine can be utilized. The smoke that rises from them points to the ways in which inanimate matter, and specifically ephemeral, shifting, and permeable matter, takes on human, biopolitical and necropolitical significance and effect.

Simultaneously empty and dense, dispersed and ingested, LESBIAN GULLS, DEAD ZONES, SWEAT AND T. invites visitors to lose the illusion of their bodily boundaries and float within the influence of a hormonal mist, suggesting questions of relationship and care, dosage and tolerance and inciting a dissipating redefinition of subjectivity and knowledge.

Available at the show is a new artist edition by Lin and Staff, produced by Closing. 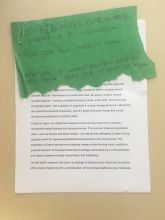