Night Eyes is the tenth full length album by the reclusive mudboy, and his first in seven years. A key member of the early 2000's free-folk and experimental music scene coming out of Providence, Rhode Island, mudboy is largely identified with modified analog electronic keyboards and a live shows featuring shamanistic performances and DIY pyrotechnics. For Night Eyes, mudboy converted a massive pipe organ in Dortmund, Germany, into an electro-acoustic instrument, at its time, the largest of its kind in the world. The subject of the musical composition is Wes Craven's 1984 film: A Nightmare on Elm Street and features key motifs and elements from that soundtrack. With Peter Schutte (Psychobuildings, Silk Flowers) at his side, mudboy takes you through a dreamscape of horrific liminal states and uncanny motifs. This limited edition pressing features hand numbered silver silkscreen covers with eyeholes burned through it, a large 23" x 34" newsprint poster, and an elaborate monograph by the artist on the subject of dreams and the uncanny in sound. 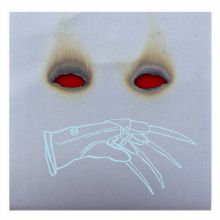