Part of a zine from Having Left: Intersectional Perspectives on Migration. The 8.5 x 11" paper features questions asked and answered between the artists.

e: what does jeong mean to you?

s: as, an udocumented immigrant what does home look like for you?

Seo Yun Son is an artist and educator living in Los Angeles, California. She received her BFA in Fine Arts from the University of California, Los Angeles. As an undocumented immigrant, her practice examines the politics of constructing one’s identity by remapping territory and citizenship as well as the circulation and progression of one’s personal memory and history.

eunhae yoo is a Los Angeles-based artist who received her BFA in Fine Arts from University of California, Los Angeles. She grew up in South Korea and immigrated to the U.S. in 2002. Her identity-based works stem from her undocumented status and the internal split caused by dichotomous cultural influences and memories. Through her conceptual practice, the artist inspects the fluid – and often clashing – nature behind the sense of belonging to oneself and to a larger entity.

Seo Yun Son & eunhae yoo engage the audience in an interactive performance that narrativizes the Korean concept of jeong through a consideration of intergenerational and traditional labor.

Curated by Hyunjee Nicole Kim, and presented by Intersectionality NOW as part of their spring 2017 programming residency at the Women’s Center for Creative Work." 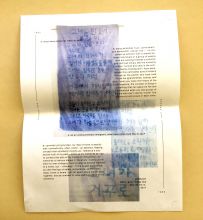