Fata Morgana originated as an audiovisual performance commissioned by the Pasadena Arts Council for the AxS Festival 2011 and curated by Steve Roden.

Fata Morgana is a kind of fragmented travelogue, reconstructed through field recordings from the Bonneville Salt Flats, Utah and Lake Mead in the Valley of Fire State Park, Nevada. The piece mirrors the rare and complex Fata Morgana mirage phenomenon which hauntingly inverts the boundaries of figure and ground over both desert lands and seas.

Fata Morgana is presented here as a stereo mix recomposed for home listening.

Originally commissioned by the Pasadena Arts Council for the AxS Festival 2011. 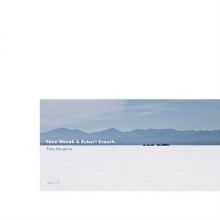