Programming sheet with author bios for the group show Fidelity of Nothing.

"Fidelity of Nothing is a group exhibition of video installation and sculptures by Lily Yu, Jamie Kim, Michelle Lee.

A-Gah- Mi (아가미) is about longing that particular someone. This project begun after a loss of my father.

“I wanted to put all my blues in this square frames and wished my world outside of the frames would be happy. “

Michelle Lee works vary from painting, sculpture, video where materiality of a human body and thoughts about human condition in relation to the human body are explored. The installations displayed in the show embody (the) idea(s) regarding the fascination of the space, divided and outside of our individual skin, as an extension of one’s own body and mind. The human body, encapsulated as the negative space separate from the space outside of the human skin, in tandem with human conditions—including/such as longing, companionship, loneliness, insatia- ble desire of being loved / accepted, and the inclined involvement of bodies to one another.

Lily is a teaching artist and lmmaker from Oakland California. Her work is primarily documentary and analog lm with the focus on ethnography and close portraits. She has worked with Bay Area Video Coalition, Bump Records, Echo Park Film Center, TEDx, and PBS. Her work has been shown in San Francisco International Film Festival, AFI Docs, and TedX Vancouver.

Jamie is a Korean born artist/ lmmaker who predominantly works with 16mm lms. Her work is derived from mental and emotional aspect. She is focused on capturing what is impalpable and ephemeral into a tangible medium. Her work has been shown in IlShin Hall in Seoul, South Korea and Chang Ucchin Museum of Arts in YangJu, South Korea. 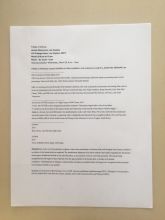