A warbled reflection of the moon in knee deep water. It's cold and nobody is answering this voice that calls across the lake. A polluted breeze creeps through an overpopulated municipality where the living resign to death drives. Electric wires and underground economies. Power hums through generations. Hatred oozes from a heartland fuck house bought cheap as a family home. A promise and hope of escape through love makes the case for a tug of war. What is inheritance? Desperation and suicidal emptiness in the misogyny of an American traditional. Dreaming about black phone screens and what we do for them. Sentimental without actually believing in sentimentality. Nostalgic without reference to any past.

What's the difference? The march of pain rolls on, plundering everything in sight. Repression surfaces like lightning on a dead road.The possibility of occasional reconciliation hangs around when nights are good. Somewhere distant, the mirage of a dog by the fireplace or what could have been safety from the holidays.

All musicians generously contributed their own arrangements
Mastered by James Plotkin
Artwork by Susanna Battin
Engineered and Produced by Neil Wogensen
Recorded in Los Angeles, CA 2015 – 2016 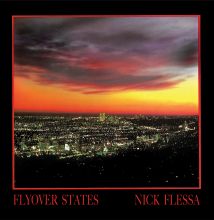