Reissue of a 1978 publication. From Joey Terrill:

"In 1978 –1979 I made an art piece in a magazine format (well before the ‘zine scene) where I combined the concept of magazines like House Beautiful, Los Angeles, and Cosmopolitan that catered to an upper to middle economic class with the sensibility of Chicano gang culture. It was tongue in cheek and used humor to ridicule both the consumerist bent of those L.A. lifestyle magazines while also pointing out the macho, self-destructive violence and inherent homophobia found in the barrio. I only made two editions of 100 copies each.

In both issues I played an undercover reporter named Santos who featured “exposes” of made up societal problems. In the first issue I exposed a secret underground network of “Homo-Homeboy” parties where vato locos congregated late at night to drink, get high and listen to Judy Garland records ending in a drunken orgy of sex and violence. The homeboys would remove their bandanas from their heads and strategically place them in either their “left” or “right” back pocket following the gay hanky codes of the 1970s. The sensibility was more Dada and Mad magazine in it’s approach than politically correct or strident.

The second issue of the magazine exposed a secret organized East L.A. terrorist network of homeboys/homegirls who in lurid photo-documentation, kidnap a white husband and wife from Westwood along with their Japanese maid to a secret eastside location where they are tied up and forced to eat menudo and watch Channel 34 novelas.

Both issues also had an advice column called “Ask Lil Loca” and beauty tips for cholas and suggestions for that most versatile fashion accessory, the bandana.” 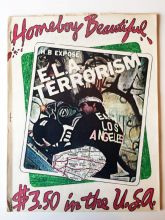