"In the installation I SEE MORE CLEARLY IN THE DARK, the viewer navigates a 7 x 8 x 12 foot cabin composed of a wooden frame and fabric. Inside the cabin, a looped film is projected in conjunction with 80 slides of text from an analog slide projector. The viewer is invited to stand or recline on the carpeted floor and watch the projections. On low pedestals are stacks of booklets containing either the images from the video or the text from the projection, a 10-page short story.

The original writing takes place in the world of the video — dark, green, and lush. It narrates the existence of two “I’s” — an amorphous, prehistoric or posthuman body, living and dreaming in a forest imbued with heavy darkness, and a character hiding in a hotel room in an unknown city, mourning and fleeing the “Resort Plan” that is all over the news: the government has a new goal of wiping out the national forests and parks to install brilliant, shiny, homogenous resorts in which its citizens will be obligated to live under conditions of total illumination, the enigma of the forest’s expansive darkness a thing of the past and a haunting source of imagination.

The speculative fiction narrative draws inspiration from Junichirō Tanizaki’s “In Praise of Shadows” (1933). A freeform philosophical essay on the subject of darkness, shadow and subtlety in Japanese and East Asian aesthetics, considering areas as diverse as architecture, Nō theater, crystals, jade, pottery, tableware, food, toilets, and lacquerware seen by candlelight, it revels in the beauty that shadows can hold, and that the spaces and objects that animate our daily livelihoods in turn contain within them. This homage to the dim and dusky contrasts with Western ideals of brightness, whiteness, and general brilliance — European notions of aesthetics and knowledge production have long followed the cult of light, from the Enlightenment, to luminous 17th century palaces like Versailles with its glistening Hall of Mirrors, to the contemporary white cube. But what if we were to consider another longstanding mode of seeing, one that make space for shadows, for darkness, for the negation of representation? That negation may just conceal a freedom, an indeterminate quietness whose agency lies in its invisibility. The darkness of the forest, currently threatened by the Trump administration’s pledges of destruction and “development,” is home to an ancient and tenebrous autonomy. On the levels of both existential and imminent environmental crisis, what traces will these forms of “development,” the product of centuries of colonizing and capitalistic instincts, leave on our planet’s many ecosystems, both human and nonhuman? Through this work of fiction, I seek to develop an aesthetics of darkness, engaging ways of seeing that resist the overwhelming forces of corporate/state neoliberalism, surveillance, and the myth of obsolesce propagated by a capitalist market. I SEE MORE CLEARLY IN THE DARK is a proposition that some places might best be left in the shadows, and a meditative pause to recognize the darkness that still remains." 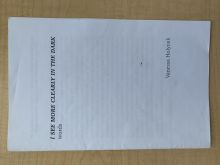