Special-edition risograph mailer, printed in the BAMPFA Art Lab, featuring an archival interview with Ernestine Eckstein from a 1966 issue of The Ladder: A Lesbian Review. Eckstein was an activist who began her social justice work as a student at Indiana University, where she worked with the NAACP during the Civil Rights movement; the Daughters of Bilitis, the first lesbian civil and political rights organization in the United States, formed in San Francisco in 1955; and later the Black Women Organized for Political Action, founded in 1973. The mailer offers an early glimpse into Eckstein’s developing political philosophy and thought.

“Q: Do you find that your closest friends are homosexual?

A: No, I don’t. I wish it were true. I’m always reaching toward a complete communication with people, and I would like to be able to really communicate with a Negro lesbian. This would be a perfect situation so far as I’m concerned.” 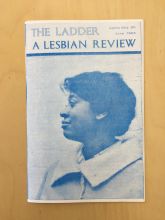