2 pages of materials from the Nuestrxs Putxs exhibition at Human Resources, including the brochure and artist statement.

"THIS HOLY DAY will be the first public viewing of these ritual grounds, a realm both prelapsarian and post-apocalyptic that stands outside of time. All are invited to revel in the power of femininity, to rejoice in the timelessness of cuir impurity, and to collect talismans from its borderless pilgrimage route at the Sacred Rose Mercadito. Nuestrxs Putxs proffers icons for those who have so long been denied the graven image that is their due.

This exhibition is made possible thanks to support from kurimanzutto, Nicodim Gallery, and Reena Spaulings Gallery. Generous support has been provided by Botanica Fine Art, Tracy O’Brien and Thaddeus J. Stauber, David and Deborah Chilewich, Ruchika Garga, and Galerie Barbara Weiss. Additional support has been provided by Barbara and Edward Goldberg, Hannah Howe, and Pamela Robinson. 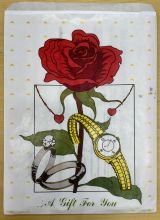