Photographs of the installation and opening for Twenty Four Hour Fantasy Reality, an exhitition that engages fashion, art production, and community dynamics.

What we wear is often shorthand for who we are, or who we want to be.

The codified manner in which we dress signals positions of power through public and private spheres, specifically the public notions of meaning and private hierarchal structures of inclusion and exclusion. Fascination with cultural identity is both the means and the end: fashion, like art, engages a public desiring insight on culture from seeing itself reflected back on a critical, yet consumable scale.

Viewed within an art context, the work of Audrey Wollen and Cali Thornhill DeWitt supports our understanding of the communicative capacity of images and objects to materialize concepts, fictions, and narratives — self-constructed and projected — across social spheres. In this exhibition, both artists have taken the immediately recognizable form of the sweatshirt as a focal point, to mobilize ideas and references to fashion identities within the larger context of contemporary art.

The displayed sweatshirts form a suggestive yet speculative proposition on how to approach the production and reception of contemporary art making. The production of fashion illuminates the production of art today: no longer tied to religious or ideological representation, art instead is subject to the laws of marketing. Both artists utilize a similarly critical stance toward what they offer to the viewer: a kind of branding that questions its own status and role as much as that of its subjects. Removed from their strict commercial function, the sweatshirts on view challenge the complex relationship between appropriation and concept, identity and lifestyle, class and taste. In this duality of ideological positions, the distinction between art object and clothing item is intentionally blurred.

Audrey Wollen’s hoodies appropriate the aesthetics of protest wear, specifically the Black Bloc tactic, where a kind of uniformity or neutrality allows the protest group to function as one large, unified mass in the midst of a storm. This strategy allows a certain anonymity, which can be useful when risking arrest, and also creates space, a coherent system. It is a strategy of negation — oversized and unisex, improvised as voluntary alienation — and assumes a direct, oppositional stance not only to traditional institutions, but toward audiences as well. An aesthetics of action outlines the differences between external representation and self-presentation; from the outside, the Bloc is regarded as anonymous, therefore less autonomous, and more of an artifact, or even a brand.

An understanding of the aesthetic experience of Wollen’s work is one mediated not just by the work’s material presence, but also through the re-examination of language. One is both able and unable to take in the entire text on these sweatshirts. In order to grasp the sequence, one has to come in close to the work, close enough to register the fragmentary details, losing sight of the lateral whole, falling back to see how the parts interact. That Wollen’s text at first reads as decorative flourishes makes this process all the more rewarding. Taken from a feminist experimental novel first published in 1969, the text proposes a space of laughter and destruction, the fragmentation of language itself enacting the taking apart and pulling together of the revolutionary women.

Cali Thornhill DeWitt’s memorial crewnecks are directly influenced by the sweatshirts worn and shared by Los Angeles gang members of the 1980s and 1990s. Created not only to canonize fallen heroes, the sweats served to communicate with the wearer’s extended family, by way of visual cues and coded language. Billboard culture, neighborhood alliances, hierarchal friendships, blood in blood out, custom fit in one cool package. DeWitt plays with this form, paying tribute to his own idols. The caveat is that they happen to be everyone else’s idols as well. Spelled out in gothic arcs, the celebrity personalities and their defining attitudes are forever suspended in death within the atmosphere and environment of Los Angeles at that particular moment. It comes to an end. Yes baby it’s all over now bye bye I’m gone.

Both artists complicate ideas of how a community is perceived collectively. Los Angeles is distinctive in that it is built and structured to support a number of individual identities simultaneously: Mall brats, Executives in soft shouldered Armani, empty blondes, surfer bros, Midwest transplants and the valley kids that never left. All form temporary and informal communities, trying to fit within the cracks of existing structures.

Wollen’s highly intimate vision imparts us with the possibility of challenging fixed notions of representation. She introduces the idea of the body as a cultural and political archive, marked by the images, narratives, and practices stored within it. DeWitt affirms how these transformative and communicational aspects are fixed, and remain, even through death. In a city supported by fiction and fictionalizing, identity is prized currency, with celebrity validated through the monetization of private behavior in public spaces. DeWitt deftly folds his own personal idiosyncratic mythologies and identities into those of his subjects.
This shared contribution by DeWitt and Wollen lays the groundwork for an aesthetic narrative and language of their own that reference and refer back to one another. While at first glance the works on view appear wholly dissimilar – other than their immediate material qualities – therein lies a tacit understanding between the artists and their audience about the work’s intentions: to make a statement about the art work as an object connecting participants with shared passions, identifications, and politics.

As the viewer walks into the Los Angeles night, she stops to consider a corner she has passed many times: the places where people have died, and the buildings that have yet to fall. 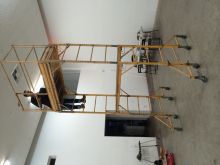 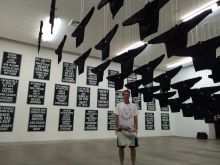 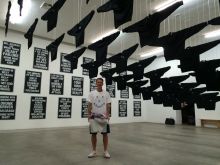 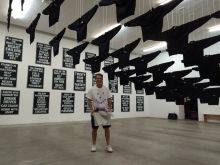 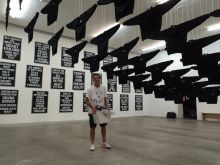 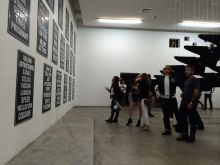 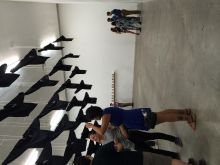 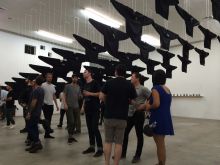 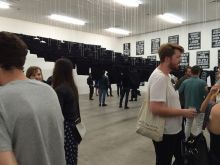