"Tony Martin arrived to San Francisco in 1962, promptly forging creative alliances and lifetime friendships with “new music” people Morton Subotnick, Pauline Oliveros, and Ramon Sender. When the San Francisco Tape Music Center moved to its location at 321 Divisadero St., Martin was invited by co-directors Sender and Subotnick to become the Visual Director. With special attention paid to working in the tape music medium, as well as performing regularly, they joined with Mills Center for Contemporary Music in ‘67. During the SFTMC days Martin was responsible for numerous visual compositions, including Terry Riley’s In C performance, as well as Sender’s Desert Ambulance. Martin was deeply engaged in experimenting with light via overhead and slide projectors, mixing paint, oil, water, and objects to build his light compositions. His following grew as a culture of psychedelia pervaded the 1960s and his light shows became popular amongst bands such as Jefferson Airplane and Grateful Dead. During this time he began to build “interactions” by engineering entire environments using sensors and mirrors. By the late ’60s he returned to New York City where he continued his focus for these types of installations; time and time again synthesizing his technological skills with painting as a moving image. A painter at heart, he continued with consideration of his experience working with his viewer-activated sculptures, as well as his devotion to the medium of light — maintaining a thread that binds all aspects of his work. His latest piece entitled Proximity Switched Installation (2012) is a clear culmination of a lifetime of experimentation/production. A video demonstration of this installation is available to view online and includes musical accompaniment by Compound Eye (Spring Press).

The Variable Place is the first book of its kind to tie together over 50 years of Tony Martin’s work. It includes an in-depth interview with Martin by Will Cameron, Albert Herter and the editors. As well as a special introduction by long-time friend/collaborator Pauline Oliveros." 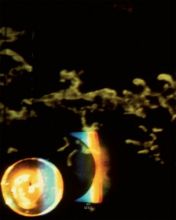 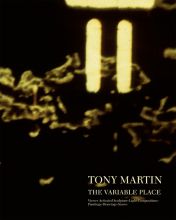